Stoystown was founded in 1774 in the Pennsylvania Province, making it one of the few Somerset County communities that actually predates Somerset County.
In its infancy the community was set in a wilderness in which white settlers from Europe fought Native Americans for land and other resources. After the Revolutionary War, founder Daniel Stoy returned to Stoystown and laid out the first town lots in 1796.
Joseph Buck and Alexander Ogle opened the first store around 1800. A post office was built in 1811. Eight years later the town was incorporated, but it later lost the charter because of neglect on the part of borough officials. The town was incorporated again in 1838. During the stagecoach days Stoystown was one of the county's chief commercial centers. It was a place where horses would be changed for the next stage trip across the Allegheny Mountains. The town's reputation as a traveler's mecca continued with the construction of several hotels, including the Diamond Hotel and the Hite Hotel, which exists today as a senior housing center.
Stoystown continued to grow through much of the 19th century, pausing briefly for the Civil War when many young men were called to duty. In the early 20th century coal mining became one of the town's principal industries.
By the late 1930s the Route 30 bypass was completed, funneling traffic away from the borough. A passenger train quit making stops in Stoystown (Kantner station) two decades later. The community school hosted its last student in the 1960s.
Today, the Stoyestown Area Historical Society is leading an effort to restore some of the town's historical sites, including a 19th century log home that is being rebuilt near the community building.
Meanwhile, the borough and county are planning to improve the town's infrastructure by connecting Stoystown to the Reading Mines water system only a few miles away. The system is part of the Somerset Township Municipal Authority.
The town is currently served by four deep wells, according to council President Amos Snyder. Snyder said he can't remember the borough running out of water in his 14 years as a resident, but there have been many water shortages. The taste of the borough's water has prompted some residents to purchase the bottled variety.
"Everybody wants a better quality of water and more of it," he said.
A portion of the county's 2010 bond issue will be used to complete the water project, setting the stage for the town to continue to grow.

Stoystown was founded in 1774 by Capt. Daniel Stoy, an Englishman who came to Pennsylvania in 1769 and served in the Revolutionary War. He died in 1835 and was buried in Stoystown's Union Cemetery.

Stoystown Borough was incorporated on March 29, 1819, but lost that distinction several years later, according to a story in the Jan. 9, 1974, edition of the Daily American.

"Several years later the charter was forfeited through neglect on the part of borough officials," the newspaper reported, "proving once again that bureaucratic bumbling is not a particularly new phenomenon."

Stoystown became part of Quemahoning Township until 1838, when it was incorporated for a second time.

Historical records give no reason for two different spellings of the town's name: Stoystown and the seldom-used Stoyestown. But historical society member Don Deaner has an idea: The founder "didn't know how to spell, so he added an 'e,'" he said with a laugh. "He wasn't an English major."

The Stoyestown Area Historical Society is reconstructing a 19th century log cabin near the fire hall. Historical society members believe the cabin dates to at least 1813. 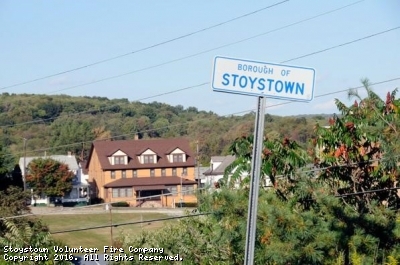 This site has been viewed 85,704 times.
Calls
News
Events
Pictures
Apparatus
Maintained by the members and staff of Stoystown Volunteer Fire Company. Designated trademarks and brands are the property of their respective owners. Copyright © 2006-2022. YourFirstDue Inc. All Rights Reserved. Content on this web site is supplied by Stoystown Volunteer Fire Company. YourFirstDue Inc. cannot be held responsible or liable for any content, text, pictures, or any other media found on this web site.
Management login
Powered by